The National University of Agriculture is an academic community made up of students, faculty, graduates, and administrative and support staff that assumes higher education as a fundamental right and an essential public service.

The National University of Agriculture has as its primary purpose the management of knowledge to contribute to the development of the national agricultural sector and related areas in its multidimensionality: land, water, sea, air; through humanistic, scientific and technological training, the generation and
dissemination of knowledge, as well as the realization of activities linked to society, with a clear awareness of the multicultural and complex nature of the Honduran nation.

These activities are developed within a framework of continuous improvement, with multi-, inter- and cross-cultural approaches, and with ethical principles and social and environmental responsibility that guide the pursuit of quality and relevance with equity for the fulfillment of its mission.

The National University of Agriculture has its origins in the Demonstrative Farm School created by Legislative Decree No. 35 of January 20, 1950 of the National Congress of Honduras, which changed its name to National School of Agriculture in 1968.

Its conversion to a University was authorized by the sovereign National Congress of the Republic through Decree No. 192-2001 dated November 1, 2001 and published in the Official Gazette La Gaceta on December 6, 2001. For all applicable legal purposes, the National University of Agriculture replaces the National School of Agriculture.

The creation, organization and operation of the National University of Agriculture was approved by the Council of Higher Education through Agreement 1058-153-2002 of December 2, 2002.

A bit of history

At that time (1950), the president of Honduras was Dr. Juan Manuel Gálvez, who together with the initiative of a group of citizens of the department of Olancho, led by Don Alberto Díaz Osorio Q.E.P.D., Don Vicente Alemán and others, sanctioned decree No. 35, which gave life to the Demonstration Farm School.

The academic services were opened in May 1952, with the financial support of the Inter-American Cooperative Education Service (SCIDE) through the STICA, Cooperative Project of the Secretariat of Agriculture, whose owner was Engineer Benjamín Membreño Marín, whose name was given to the H Grande building of the institution.

In 1968, the School changed its name to the National School of Agriculture (ENA) and came under the tutelage of the Ministry of Public Education, with a new academic level: Bachelor in Agricultural Sciences, which could be obtained after three years of studies, with the general common cycle entrance requirement.

In February 1978, by Decree No. 587, the State in Council of Ministers agreed to raise the academic level of the ENA to non-university higher education. With this academic level, the degree of Agronomist was granted through a curriculum designed for three years, with a high school diploma as an entrance requirement.

It is currently a decentralized institution of the State of Honduras, a category acquired through Legislative Decree No. 192-2001.

In 1994, by Decree No. 200-58-94, the ENA was incorporated into the higher education system, granting since then the degree of Agronomist Engineer at the Bachelor's degree level. This curriculum is completed in four years.

In 2002, by decree 192-2001, the ENA was renamed the National University of Agriculture (UNA), a self-governing institution of higher education dedicated to the training of professionals in agricultural and related sciences. 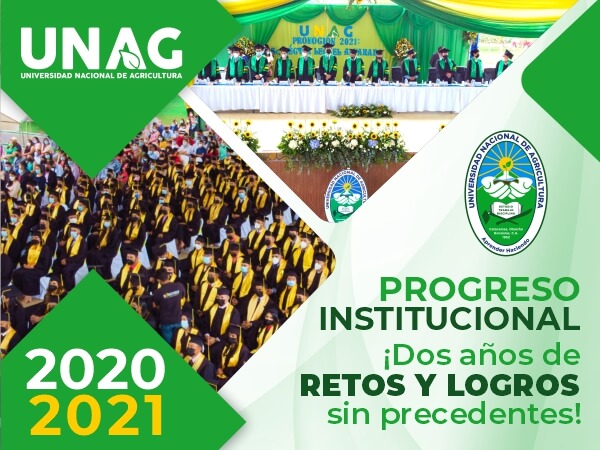